New Yorkers love to get away from the city, especially on long weekends during the summer, but if you didn’t make plans, it’s not too late to have a fun three-day weekend. There a lots of interesting places to explore within the five boroughs of New York City, and there are plenty of easy day trips outside of the city that don’t require finding a “last minute”  car rental.

Here are five ideas for outdoor excersions that will feel like mini-vacations. 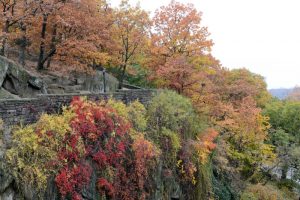 You can start by catching the A train to 207th Street. From there you can visit Fort Tryon Park. The park offers beautiful Hudson River views on winding paths. This is also where you can find visit The Cloisters. You can then walk to Inwood Hill Park, which offers hiking trails with old growth trees. There is also a Nature Center there where you can learn more about the local ecology. Sometimes there are additional activities sponsored by the Parks Department, such as kayaking.

Along the route from Fort Tryon Park to Inwood Hill Park there are other attractions like the Dykeman Farmhouse Museum – the only remaining Dutch colonial house in New York (circa 1764). There are several good restaurants in the neighborhood. I would recommend Indian Road Cafe and Bocaditos Bistro.

Adjacent to Inwood Hill Park is a small park, Isham Park. In Isham Park, you will find Bruce’s Garden. This is beautiful community flower garden named for Bruce Reynolds, a local policeman who was killed on 9/11.

You can see the rest of this post at Perfect English NYC.

Dining in and out, New York Stories, Travel Blog Comments Off on 5 Fun Day Trips in or near New York City (For Labor Day Weekend or Any Weekend)

It’s Been Too Long

I was shocked to discover I hadn’t posted here since March. I feel like the dad who went out for cigarettes and wound up on the bum in Oakland. Really, I’d meant to come back. There has been some writing since then although not enough to justify my existence by any means.  You can find some of my snarky recaps and other snark about television here. As you may also know, I’ve been gigging it  teaching ESL and doing some writing coaching, so there’s a language blog here, which may be entertaining even for native speakers, assuming you’re obsessed by the difference between “got” and “gotten” or you live in an actual democracy and are still trying to figure out how the electoral college works.

As to the reason for my “silence” — don’t get me started. It’s a crisis of confidence that’s been coming on a long time, a feeling that I’m shouting in an empty room, etc. You know the scene in Peter Pan where Peter shamelessly makes us applaud to save Tinkerbell, that’s got to be some kind of metaphor for the arts. No one writes for themselves alone.

Keeping up with The Americans and Homeland

This week on The Americans, Elizabeth proves once again how much self-awareness she lacks (all of it). Stan and Aderholt might want to rethink their recruiting techniques. The noose tightens around Oleg, and we get a surprise blast from the past. Catch my recap of The Midges, season 5, episode 3 at The Agony Booth.

And when you’re done with that, you can also relive the joy you felt when Peter Quinn hit Dar Adal upside the head with a gun on Homeland, season 6, episode 9 by reading my ‘cap of that episode.

But that’s not all! This very week, I also posted about Whatever Happened to Baby Jane and other Feud related films that show older women behaving very, very badly. All this posting over there, may explain why I’ve been neglecting this blog!

They had to film this on the beach because these ladies had chewed up all the scenary.

A Modest Proposal 2.0: For preventing the elderly from being a burden on their children and taxpayers

Let us not worry about too much about being “politically correct.” Politicians, including that great Republican intellect, the very conscious of his party, the Honorable Paul Ryan has struggled with this issue, yet even he has endeavored to use the utmost tact when explaining to the public that Obamacare is in a “death spiral” because it burdens the healthy with paying insurance premiums that would benefit the sick.

Critics have disingenuously stated that Congressman Ryan misunderstands the entire concept of insurance, yet a driver prone to accidents would expect to pay more for insurance, and so the elderly, who are most prone to illness, should have no complaint if they too must pay more for coverage. It’s perfectly logical, is it not? Of course, one might argue, that all of us are healthy until we are sick, and illness or accident can strike at any age, but even if this happens, frankly cancer moves more quickly when it strikes the young. They are like to die sooner, and if they recover from some unfortunate event, they will have many years ahead to contribute to the economy and their society.

That family man of moral rectitude, Congressman Ryan cannot say out loud, just yet, what some of his party have hinted at. (After all old people vote.) Nor would someone of such a kindly disposition suggest taking away all the income of people as they age. Even he understands that if every penny needed to go toward insurance and healthcare, other facets of the economy might suffer. The elderly might no longer be able to afford to house themselves, and would need to move in with their adult children. Once upon this was the norm, and some of us film buffs may even recall the depression era classic, Make Way for Tomorrow, which dealt honestly with the problem this presented for families, and ends with an elderly couple parting forever to live with different households in different part of the countries. The cruelty of the separation leaves “not a dry eye in the house.” Would the sweet mercy of death not be a better alternative? END_OF_DOCUMENT_TOKEN_TO_BE_REPLACED

Politics and Culture Comments Off on A Modest Proposal 2.0: For preventing the elderly from being a burden on their children and taxpayers

Homeland: It’s the Season for Treason

We can all agree that Dar Adal has to go, right? And it’s going to be very satisfying when it happens. But who’s going to be the one to take him out? For speculation on these and other great issues of the day, such as how did Peter Quinn learn to hold his breath underwater while not freezing to death, check out my Homeland recaps at The Agony Booth — which is full of great stuff by me and lots of other people.

Bonus points if you know how The Agony Booth got its name. Comments and discussion are welcome on those pages!